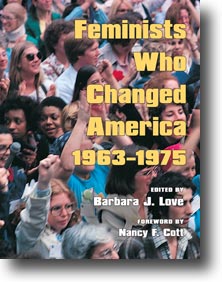 GaIDI Scholars Ruth Nemzoff and Roberta Salper along with Paula Doress-Worters, have been included in the book, Feminists Who Changed America 1963-1975, edited by Barbara Love, with a foreword by Nancy F. Cott (Harvard historian). Just published by the University of Illinois Press, it is over 500 pages with 2000 biographies of feminists selected by an Advisory Board because of their significant contributions during this period.
Its publication was celebrated by an event sponsored by The Veteran Feminists of America and hosted by Judith Shapiro, President of Barnard College. Hundreds of women representing the broad political spectrum of the second wave women’s movement came to reflect on what they had done right and how they could continue to improve the world. Featured speakers included Gloria Steinam and Heather Booth and a tribute was paid to Ellen Willis, one of the founders of Redstockings, a radical group in 1970s in New York. Other memorable figures in attendance were Catherine MacKinnon, Kate Millet, Sheila Tobias, Roxanne Dunbar-Ortiz, Karen Decrow, and Catherine Stimpson. During the "rap session", it was striking to listen to many women, each working in the separate arenas which create the fabric of life (art, music, religion, health, politics, etc), recall what it took to change America: an abused woman thanked the group for the support she received that helped resolve her problems, a lesbian thanked the group for helping her imagine she could have children which indeed she did. Women talked of changes in the health care system, in religions. Discussions ensued on how no field has been left untouched by the 2nd wave feminists who indeed did change the world.
To say a bit more on each of the above WSRC Scholars, Paula Doress-Worters was a founder of the Boston Women's Health Collective in 1969 which wrote Our Bodies, Ourselves which has not only transformed American medicine, but has been translated in multiple languages. Paula was a contributor to all editions of Our Bodies, Ourselves, including Our Bodies, Ourselves for the New Century (1998), Ourselves Growing Older (1986, 1994) and Ourselves and Our Children (1978). She continues to serve on the founders committee and to publish in the field of health care and women.
Ruth Nemzoff started the women's movement in southern New Hampshire and a counseling service for women. Later she was the first woman to serve while pregnant in a regular session of the New Hampshire legislature where she sponsored legislation to open adoption records, and to give education to displaced homemakers. She rose to be assistant minority leader. She began the Equal Opportunity Office in The New Hampshire Department of Education and served as the first women deputy Commissioner of Health and welfare in that state and the first women on the New Hampshire Business Development Corporation and on the board of the Bank of New Hampshire. Later she was one of the founders of the National Women's Legislator's lobby.
Roberta Salper was the head of the first Women’s Studies Program in the United States at San Diego State University (then College) in 1970. As such, she was the first full-time faculty member hired in Women's Studies. Author of Female Liberation: History and Current Politics (Vintage, 1971), one of the first anthologies on the women's Movement, she was an early activist in the Women's Caucus of the New University Conference (1969), was a member of the first Committee on the Status of Women in the Profession of the Modern Language Association (1969) and was a principal founder of Women's Liberation in Pittsburgh (1968). As Assistant Professor and Assistant Dean of the College of Arts and Sciences at the University of Pittsburgh, she both lobbied to create and taught the university's first women's studies course.
Posted by GaIDI at Thursday, November 30, 2006