Celebrating Women's Days around the World, Year round 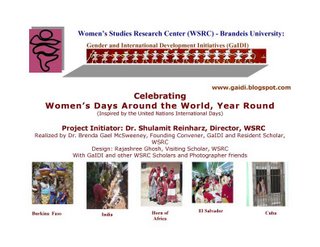 Inspired by the United Nations International Days, GaIDI just launched a series of photographs celebrating women's causes around the world, year round. The seeds of this idea were sown by WSRC Director Shulamit Reinharz, while GaIDI's Founding Convener Brenda McSweeney along with Visiting Scholar Rajashree Ghosh and the support of GaIDI Members and photographer friends took the next steps. From the outset, it was proposed that the photo series represent Scholars' passions! A wall at the WSRC premises on the Brandeis University campus was designated for this purpose. GaIDI and other WSRC Scholars were then asked to choose an officially designated day that captures a cause that they feel strongly about and contribute a photograph (including a woman). Growing numbers of poignant photographs are appearing on the wall for viewing. Each contribution is captioned with the name of the photographer or artist, the International Day concerned, a short description of the compelling cause the photograph depicts, and the Scholar contact to facilitate an ongoing interaction on these global priority themes. To view some of the photographs submitted, do visit : http://www.flickr.com/photos/42433998@N00/sets/72157594259748649/
Posted by GaIDI at Wednesday, August 30, 2006 No comments: 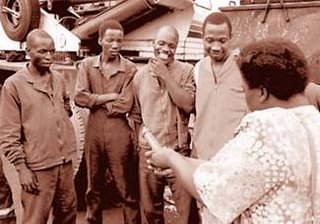 An AIDs awareness worker in Zimbabwe showing truck drivers the correct way to use condoms
Photo courtesy: U.S. Agency for International Development
Nick Danforth led a PowerPoint discussion on how to improve the roles of men, particularly African men, in the sexual and reproductive health of women. In particular, he dissected the debate about ABC (or Abstinence, Be faithful and use Condoms) policies to encourage abstinence among youth, being faithful among couples, and condoms if not A or B. As part of his 20-year effort to design and evaluate programs to educate men about reproductive health, Nick described projects like the campaign of the Joint UN Program on HIV/AIDS (UNAIDS) and other anti-AIDS organizations. Their goal is to complement prevention programs for women and girls with work that more directly involves men as well. "The time is ripe to start seeing men not as some kind of problem, but as part of the solution," declared a 2000 UNAIDS report. Nick's conclusions: A and B behaviors are crucial in determining HIV prevalence. All three ABC behavioral changes are optimal to affect HIV, but A and B must be there. Evidently A and B can be promoted through interventions resulting in partner reduction and delay of sexual debut. However, some people will always engage in high-risk sexual behavior, and so need condoms.
Posted by GaIDI at Thursday, August 03, 2006 No comments: