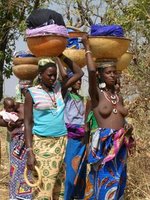 A presentation titled "A Gender Case Study in Progress: Whither Women's Education in Burkina Faso?!" was made by Brenda Gael McSweeney, Visiting Scholar, WSRC and Jennifer Frisanco of the Student Scholar Partnership on 16 March 2006. Adapting the case methodology to the development scene and through a gender lens, this research highlighted women's literacy and girls' education in . More specifically the Case Study focused on the legacy of a pilot Women's Education Project launched by the Government and UNESCO in the 70s, led by charismatic National Coordinator Scholastique Kompaoré. Since then Brenda Gael McSweeney led numerous United Nations missions to , and a team field trip undertaken with Mrs. Kompaoré in November-December 2005 was WSRC-related.

Going back, the need for the Women's Education Project came from within the communities and key actors who till date remain active participants and agents of change. After taking in basic impressions and conducting initial studies, the community members and local sociologists decided that to reach women, it would be crucial to reduce their workloads. Women spent their time hauling water, fetching wood, pounding millet and looking after infants and had just over an hour of free time each day.

Given the dire situation of women's literacy and girls' education in the country, this Project introduced workload-lightening technologies. Water pumps eliminated the need for women and girls to plod miles for water, millet grinding mills replaced tedious hand grinding, and donkey carts substituted for hauling heavy loads on their heads. Functional literacy activities conveyed health advice and tips on hygiene, such as how to filter swamp water that dramatically lowered infant mortality.

Mobilizing women's groups was one of the Project's main activities and once formed they boosted women's confidence, knowledge and group solidarity. A new and inspiring change in the community occurred, with women forging ahead, initiating action and recognizing the power of their own voices. Slides showed women today openly discussing sensitive issues in front of large audiences and deciding on community priorities. These women for example vocally condemned Female Genital Mutilation that has effectively been rendered illegal in the country since 1996.

Today the Government of Burkina invests over 22% of the national budget into education, well above the all-Africa average. While female literacy remains low at around nine percent, girls' enrollment and completion rates in primary school nearly match those of boys. The population in the tiny is proud to broadcast that girls attend school alongside boys, and that in all but one grade girls are at the top of their classes.