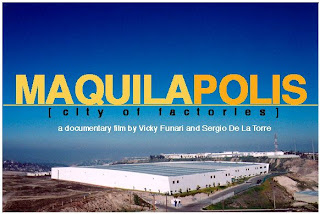 The three-hour and well-attended event at the WSRC included a film, music, poetry reading and discussion about the experiences of thousands of women who work in the assembly-for-export maquiladoras (sweatshops) in the NAFTA-generated industrial free trade zones in Tijuana and Ciudad Juárez, México.

The new documentary film, ”Maquilapolis,” by Vicky Funari and Sergio De La Torre, portrayed, from the women workers’ perspective (the people with the cameras), their daily struggle to survive and how they move beyond that struggle and organize for change in the maquiladora owned by Panasonic.

During the refreshment break the audience listened to music (in Spanish) by Los Tigres Del Norte, inspired by the “women of Juarez.”

Marjorie Agosín, poet, activist and Wellesley College Professor, read excerpts from her recently published book of poetry, Secrets in the Sand: The Young Women of Juárez, which brings attention to the hundreds of women of Ciudad Juárez, most of whom are indigenous and who work in the maquiladoras and have been murdered and disappeared, with impunity, in the past decade.

The discussion which followed included the event organizers, the audience, and special guests from Amnesty International and National Latino Independent Producers.This event exemplified the WSRC motto, “Where Research, Art, and Activism Converge,” and it portrayed Mexican women at the other end of the spectrum compared to the Mexican women in the photography exhibit of Daniela Rossell’s “Ricas y Famosas,” that was in the WSRC gallery at that time.